Choices for Cross Necklaces for Men

If you are interested in cross necklaces for men only as fashion accessories and are not worried about any underlying meaning, virtually any such necklace will do. But, if you want to specifically demonstrate your commitment to Christianity, you need to know a bit about types of cross jewelry and the meanings of various types of crosses.

The sleek silver cross features the Roman or Latin Cross with a Trinity knot that symbolizes the Father, the Son, and the Holy Spirit.

A cross is a pair of crossed lines typically resembling a lower case letter t. A crucifix is a depiction of Jesus of Nazareth hanging from the cross. There is no mistaking the religious significance of a crucifix. It is clearly a statement of religious commitment typically worn by those of the Roman Catholic religion. In regard to cross necklaces for men, a lower case t cross will be the least confusing as it represents for Christians, typically Protestants, the empty cross signifying the risen Christ. If you vary from that basic cross shape, which is known as the Latin cross, you should know a bit more about crosses.

This cross is the Latin cross turned upside down. In social media and pop culture you may get the mistaken belief that this is a Satanic version of the cross. The upside down cross is known as St. Peter’s Cross. Peter was the disciple of Christ who went on to be the first leader of the Christian church in Rome. Today he is considered to have been the first Pope. Peter did not believe himself to be worthy to die in the same manner as his Lord. Thus, when he was to be executed by the Romans he asked to be crucified upside down, thus the inverted cross represents the humility and piety of the follower of Jesus who was the first to lead the Catholic Church.

Similar to what Vin Diesel wore in Fast and Furious, this Dominic Toretto’s Cross Necklace is perfect for all fans of the popular movie.

Beware of the Gnostic Cross

If you are looking for cross necklaces for men that signify commitment to Christianity, this one is a wrong choice. The Gnostic cross has a circle around it or a circle around the upper part of the cross. The Gnostics believe that God did not create the world as evidenced by all of the trouble in the world.

The Celtic Cross originated in Ireland when St. Patrick went there to convert people to Christianity. It is a Latin cross with a circle around the junction of the vertical and lateral arms of the cross. Some believe that St. Patrick incorporated a pagan symbol with the cross to help with his efforts to convert folks to Christianity. The more likely reason is that the circle reinforces the arms of the cross. You can find Celtic crosses dating from the 5th century standing alongside ancient churches in rural Ireland. The same reinforcing features will help protect your Celtic cross from harm when you wear it as a necklace.

This cross design features four spiked arms placed between the four arms of the Latin cross. It looks like an eight-pointed star with a longer arm at the bottom. This is not a Christian symbol but rather a symbol of a group with a different set of beliefs than those of Christianity.

Other options for cross necklaces for men are the Cross of Constantine which has a P and an X at the intersection. Constantine was the Roman emperor who converted to Christianity and put this symbol on banners and shields of his conquering army.

This cross is commonly seen on vestments of the clergy and is known as the robber’s cross or thief’s cross as it represents the device used for crucifixion with the side arms going out laterally or up like a “y” and with no top arm. It is clearly a Christian symbol.

The Greek letter tau was considered a symbol of resurrection or life. In some cases it was added at the upper three endpoints of the standard cross to enhance its religious significance.

Similar to what Vin Diesel wore in Fast and Furious, this Dominic Toretto’s Cross Necklace is perfect for all fans of the popular movie.

When to Give Cross Necklaces for Men

Although a cross necklace can be a thoughtful gift at any time, it is commonly given at baptism, confirmation, Christmas, Easter, graduation, and for a first communion. At any time this gift expresses faith, love, and hope within the Christian community. It is the eternal symbol of the sacrifice of Christ for the sins of the world.

The core beliefs and faith demonstrated by wearing cross necklaces for men are not changed when one wears a gold cross, silver cross, a cross of Damascus steel, a plain stainless steel cross or a non-Latin cross such as the Celtic cross, cross of Constantine, thief’s cross, or Tau cross. Thus you can get creative when looking for cross necklaces for men.

When choosing cross necklaces for men or women, beware of any “cross” that is not a symbol of Christianity if, in fact, you intend the cross to be a statement of faith. After that, consider when you will wear it and what sorts of wear and tear it will be subjected to. Some really fine jewelry looks great but is not a good idea for a lifetime of wear in some work and sports conditions.

Choose gold for cross necklaces for men for an elegant look. This will work for a simple gold Latin cross or for an elegantly crafted Celtic cross. 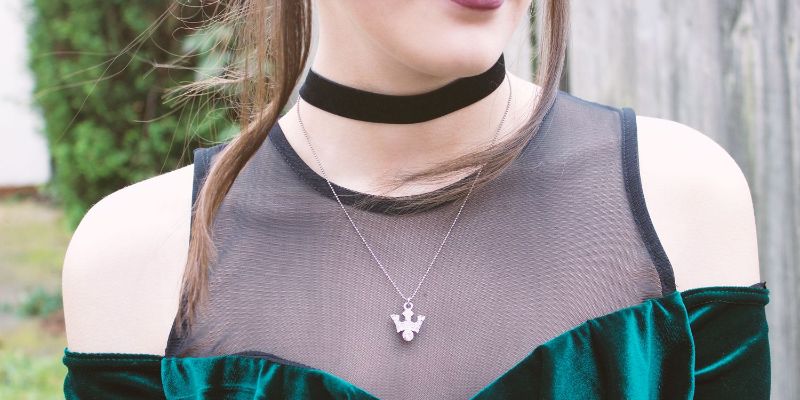